From April through September, a project was underway that would forever change the face of the school. This project, that cost millions, was funded by the schoolboard, with the goal to give ND a more modernized, polished look while providing much needed upgrades across the school. Cosmetically, as you walk through the hallways, you will notice lockers have been replaced with new ones, to reflect the school colors of navy blue, grey and white. The hallways have been repainted with a similar color scheme. As you enter the gym you will notice it has become more modernized, with new colors and logos, yet the past traditions of the school still shine through.  Structurally, a new workroom has been added (for the Religion Department); which has a more open, and welcoming look. Two classrooms (Rm 138 and 139) have been turned into project-based learning classes which allow for more student success. Lastly, new bathroom stalls and showerheads in the changerooms give these areas a much-needed upgrade. The changes that would have the biggest impact on the efficiency of ND students happened in the areas of technology, The Learning Commons and the heart of ND; the football field. ​
Click here to read more on Notre Dame's Exciting Renovations

The junior team currently sits at 1-1 on the season,  after destroying Assumption in a 17-0 blow-out victory and surrendering a close game to defending champs Holy Trinity. The junior squad’s solid play this season can be largely credited to a superb defensive unit that has allowed just one touchdown through two games. Standouts so far this season include freshman Right Guard/ Defensive End Ethan Delught and Defensive Tackle Tegan Anderson, who have excelled in both defensive and offensive aspects of the game. Which, according to Left Guard Grant Kennedy, is a major strength of the junior team.

You can catch the junior squad face off against Christ the King on October 3rd during our annual Pink Day and then against Saint Thomas Aquinas on October 10th! 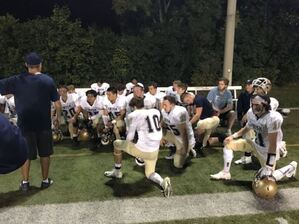 ND’s Senior Squad opened the season with a devastating loss at the hands of Corpus Christi, but hopes have never been higher. Coach Wozney told me that he expected the team to bounce back after the loss and represent the Fighting Irish like true professionals….  and bounce back they did,  defeating Assumption in their second game of the season to improve to 1-1 on the year.

Following the game, Owen LaCroix gave some insight into the team’s game two success. “In the Corpus game, team chemistry wasn’t there, it wasn’t a strong team effort. In game two against Assumption things started to come together and the team was playing as a complete unit.”

The Senior squad played HT on Friday and despite leading 34-17 in the 4th quarter, was able to close out a hard fought game 37-34 in overtime to record their second win of the year.   The boys mental toughness was on display alongside their physicality in this grueling matchup.

You can catch the seniors next on Pink Day (October 3rd), when they take on Christ the King,  and then Sept 10th when the Annual Luciani Bowl returns to Notre Dame's home turf.

If students are interested in taking on a bigger role in Drama Club, they can apply for a position on the executive committee. Executive members are the fearless leaders of the drama club. They are responsible for running club activities, as well as spreading the drama bug to all of ND!

The ND Drama Club meets Wednesdays after school in Room 113. 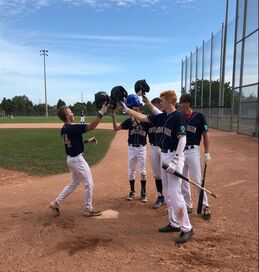 Sr Field Hockey - Lead by the scoring of Abigail Yakiwchuk and strong goaltending of Capri Dennis,  our Sr Girls are off to an undefeated 3-0 record on the season.   This crew is a force to be reckoned with and heaven help those who try to stand between these girls and an OFSAA berth!

Baseball -  Moved to the Fall this season after a soggy Spring sidelined much of the season last year.   Lead by the bats of Owen Caissie and RJ Mayor and Noah Bertin,  our boys in blue are off to a hot start!   The Baseball Fightin' Irish are 3-1 in league play and look to be a threat deep into the playoffs!

Football - Both Fightin' Irish teams (Jr & Sr) have started the year 1-1,  see the story above for more details!