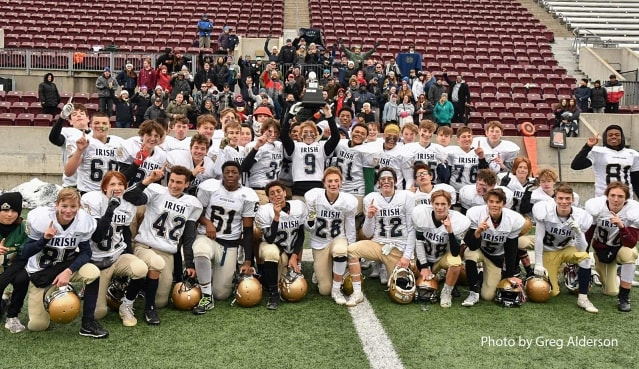 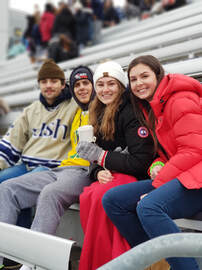 Irish'.   The Irish on the field fed off the energy from the Irish in the stands… and the results were magical!

Despite getting out to an early 8-0 lead,  the Titans hung around,  with the score at the half 8-7 in favour of the Irish.  Early in the 3rd the Titans took an 14 - 7 lead,  as the momentum of the game took a major swing towards the Titans side.   The stout Irish defense bent a bit during the latter stretch of the game,  and the Titans added 3 taking a 17 - 11 lead late into the 4th quarter.

Facing a deficit,  and with their season on the line,  the Irish went to work.   A pass to the sidle from Ryan McGuire to Nick Callan  went almost 45 yards from down to the Titans 4 yard line.   Everything was coming up Irish,  and the game seemed within their grasp… when tragedy struck.  A 'too many men on the field' penalty back the Irish up 10 yards further from the endzone.  The Titans defense held the Irish on 3 successive downs,  and forced a turnover with less than 2 minutes on the clock.  The Titans side of the stadium got loud,  and celebration mode seemed imminent. 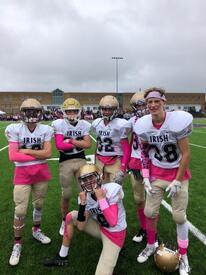 The Titans sought to close the game out forcefully,  moving the ball from the shadow of their own endzone to the 30 yardline.   Defeat seemed imminent… and then,  Jeremy Erickson made his presence felt;  A bone rattling hit on a Titans Receiver lodged the ball free… FUMBLE…  the Irish jumped on the ball, and the stadium erupted!

Down 17-11 with under two minutes to play,  Irish QB Ryan McGuire knew what needed to be done.  Running like man who knew the season was on the line,  McGuire willed Irish down the field,  breaking tackles and punishing defenders,  bringing his team closer to glory with every carry.    After a successful hook-and-ladder pass,  the Irish found themselves with a 3rd and 2 and 50 seconds on the clock.  McGuire kept the snap and scrambled to the right juking and weaving past Titans down to the 1 yard line.   With 21 seconds remaining the clock, McGuire plunged into the endzone,  tying the score at 17.   With the game on the line Chase Websdale lined up for the extra point,  and the game winning point.   The snap came,  Nathan Fraser put it down,  and the referee raised his arms,  the kick was GOOD!  With 10 seconds on the clock the Irish took the lead 18-17…  and held on for the win.

It was a cold, grey and blustery day in Hamilton,  but for hundreds of Irish fans,  and for the HCAA Champion Jr Fightin' Irish Football team,  it was truly,  a memorable one.
Click here to watch the game! 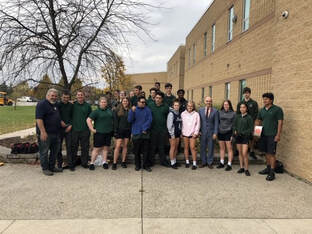 By Charleigh Goldberg
In the spring of 1940, Belgium, Luxembourg and the Netherlands were invaded by Nazi Germany. The Nazis used a tactic called “Blitzkrieg” which is German for “lightening warfare”. It is a fast-paced offensive attack that causes chaos through speed and surprise. Unfortunately for the Dutch, the Germans successfully sieged the Netherlands. Under German control, the Dutch suffered greatly. The Jewish populace was robbed of their rights and eventually sent to labour and death camps. Many civilians that remained in the Netherlands starve and froze during the Nazi occupation. To combat starvation, many ate tulip bulbs.

In June 1944, 14,000 Canadian soldiers stormed Juno Beach in the largest seaborne invasion in modern history. The Allies were successful and began to liberate the Netherlands. The Allies were welcomed with open arms.

The Dutch give thanks to Canada for our role in the liberation of the Netherlands every autumn by sending tulip bulbs to Ottawa. The tulip is symbolic of the hardships endured by the Dutch prior to their liberation. May 6th 2020 marks the 75th anniversary of the liberation of the Netherlands. In honour of this anniversary, the Dutch royal family sent a box of tulip bulbs to Notre Dame. Mrs. Obrovac’s Grade 10 History class planted the bulbs in Notre Dame’s front garden. We take great pride in this small act of remembrance and eagerly await the springtime bloom.

Behind the Scenes of ND’s Annual Dodgeball Tournament 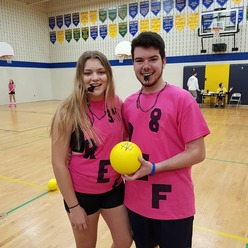 On the morning of November 20th, the Sports and Entertainment Marketing class completed the final preparation: gym set up. The last-minute stresses that built during the final days before the tournament finally melted away. There was no time to panic. It was showtime. As the balls began to fly, Mr. Downey’s students were busy behind the scenes, ensuring the tournament ran smoothly for participants and spectators.

For Notre Dame’s Fighting Irish, Dodgeball Day is so much more than a tournament. For organizers and participants alike, the tournament fosters collaboration and a sense of community. On behalf of Mr. Downey’s Sports and Entertainment Marketing class, thank you for yet another incredible Dodgeball Day! See you next year! ​

Even A Snow Storm Can't Stop the Fightin’ Irish 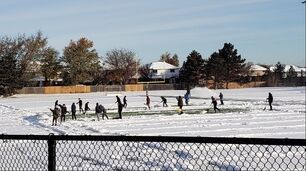 Cheryl De Lugt is a self professed very proud Fightin' Irish Football Mom.
​Below she shares a story from the ND Jr Fightin' Irish Football Season.
November 11, 2019, Remembrance Day is a day that we recognize, honor and pause to pay respect to the many courageous men and women who served our country to allow us the freedom that we all enjoy today.  On that same day Environment Canada reports the snowiest November 11th ever on record with 13cm of snow accumulation that ambushed Burlington.

The Notre Dame Fightin’ Irish junior football team was getting ready for their semi final game against St. Ignatius of Loyal on November 14th. With a huge amount of snow already covering the field and the forecast calling for the snow to continue falling all day something amazing took place on the Notre Dame sports field. A clear message was that if the snow was not cleared off of the field there would be no game. With that in mind a number of students and athletes from the team took it upon themselves to put the effort in and make it a priority to clear every inch of snow off the field. They stayed after practice and started shovelling the field without mitts or hats, they were determined to make their field playable. 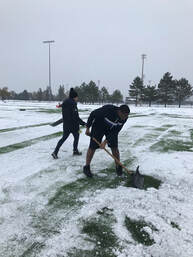 One day to game day, the field is nowhere near being game ready, so the entire team spent the day shoveling for several hours straight. As a proud football mom I needed to try and help. I put an urgent call out to the Notre Dame parent community. “If anyone could come to the school with shovels and or snow-blowers”. The response was overwhelming from students at the school, to parents and even members of the community who arrived at the school to lend a hand.  This quote came to mind when I witnessed what happened at Notre Dame “What is Teamwork? Coming together is a beginning, keeping together is progress; working together is success”- Henry Ford

The morning of the game, the field was still not ready due to five more centimetres of snow and ice that fell throughout the night. A number of parents were on the field early in the morning chipping away at the ice and dragging it off the field with tarps. Students and staff also came out to help throughout the morning. This game had to happen after all the effort that everyone had put in.

At kickoff, the whistle went and the game began. Our game against Loyola felt different from the rest because not only was it a “must win” but also made possible by our whole community. On November 14 Notre Dame’s Fighting Irish Junior Football team were champions in our hearts for their love and dedication to their sport and school. They were also champions on the field, winning 24-6. They had the heart to carry them on to victory against Holy Trinity on November 21.

On behalf of the parents of the Junior Football athletes, I would like to thank the staff, students, families and community members for demonstrating what it means to be a Notre Dame Fighting Irish. It takes a village to raise a child. We have an incredible village here. 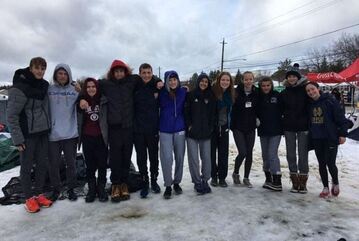 ​By Rachel Heaney
Eyes focused. Feet in place. Snow falling. Heart racing. Singlet on. Arms strong. Adrenaline kicks in. Its go time in 3....2....1..... GO! You hear the gunshot and start running like a cheetah, hunting pray in an open plain. My pray is the finish line. And I will do anything to catch it. There is no such thing as “giving up”. There is no obstacle that can prevent me from completing my race. I live for the rush I experience as I cross the finish line. I, like my fellow cross-country athletes, am not just any athlete. I am a warrior that finishes every race on empty. 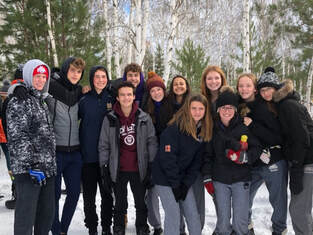 Our road to the championships in Sudbury began with a memorable five-hour road trip. Upon arrival, we familiarized ourselves with the course and immediately realized the race conditions were unlike any we had competed in before. A 20cm blanket of snow covered the ground and the air was a chilly -3C. Luckily, we were prepared with coats, sweatpants, mittens and hats.

On race day, the air was crisp, the sky was clear and the ground was covered in snow. The first race of the day was the Midget Girls 4km. Alyssa Zenn had a fantastic race and placed 72nd. Next was the Junior Boys’ 5km, in which Alton Gonsalves, Matthew Derks, Ryan Donen, Kyle Brown, and Aaron Gallachian competed. In the Junior Girls’ 5km, Ella Bowen, Stephanie Geady, Trinity Adams, Marica Smith and Rachel Heaney raced. All ten athletes made Notre Dame proud with incredible performances. Notably, Stephanie Geady placed 94th and Ella Bowen placed 110th. The final race of the day was Kayla Overholt’s 6km Senior Girls’ race in which Kayla placed 64th! It was the perfect ending to an amazing season.

We started the season as teammates and ended as a family. We would like to thank Ms. Messenger, Mr. McDermott and our ND community for making this season one to remember.